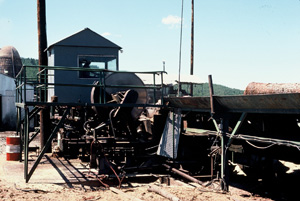 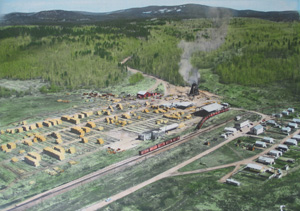 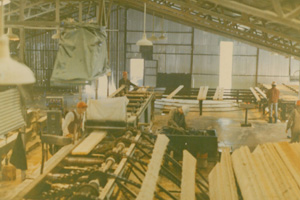 Welcome to the Family

Dunkley Lumber is a place you can call home.

If you work with Dunkley Lumber, do business with us, or have a stake in what we do, we like to think you’re part of the family. It’s been that way for decades, ever since Bill Dunkley and his family founded the company in 1951.

So, welcome to the family.

Dunkley Lumber Ltd. was established by Bill Dunkley in Strathnaver, British Columbia in 1951. What began as a small planing operation quickly expanded, with the extension of the rail line beyond the mill site and the Dunkley family’s investment in sawmilling facilities.

Bill and his brothers and sisters put the foundations of the future in place, based on focused business practices, a strong connection to the land, and their belief in family, hard work and commitment to their employees.

Growth came through acquisitions of other operations through the 50s and early 60s. A mill redesign and modernization beginning in 1964 allowed the company to keep pace with an industry in transition through the late 60s and 70s.

The Dunkley legacy lived on in the name. But the business changed hands in 1977 when brothers Tony, Joe, Henry and Max Novak acquired the company.

Already a successful logging family from the region, the Novaks were schooled in the same work ethic as the Dunkleys. Turning their attention and business smarts to the sawmilling industry, the Novak brothers proceeded to make significant investments in modernization at the Dunkley facility.

They started by replacing the small log sawmilling line in 1980. That was followed by the replacement of the large log line in 1985 and further optimization of the small log line. A new planer facility was completed in 1989.

The modernization program continued through the 90s, with the replacement of the log bucking and log debarking areas of the sawmill, upgrades to the chip-n-saw and canter, and optimization of scanning technology to improve fibre recovery and increase mill efficiency.

The Novaks recognized early on that future success would rely on product integration and full fibre optimization. So they began improving residual recovery and sorting processes, added precision end trimming and trim block retrieval, and expanded drying capacity and efficiency. 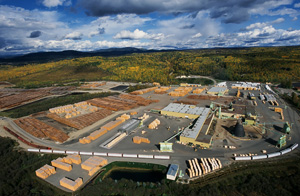 Dunkley Lumber doubled its sawmilling capacity in 2004 with the completion of two additional small log lines. Efficiency was also increased with the addition of more dry kilns and expanded and paved lumber yards.

A significant expansion of the planer mill was completed in 2008. A fully automated lumber grading system was installed, along with additional trimsaws, a second sorting system, autostacker, banding and paperwrapping stations.

True whole-log utilization arrived in 2009 with the shutdown of the beehive burner and the implementation of a hogging system. Residuals are now separated, sorted and used for energy production, and to supply fibre for the pulp and paper, bio-energy and wood pellet industries. 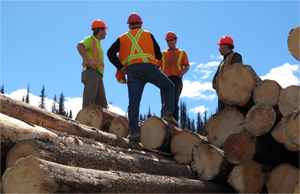 In early 2019, Dunkley acquired two sawmill/planermill operations – Foothills Forest Products, located in Grande Cache, Alberta and Edgewood Forest Products, located in Carrot River, Saskatchewan. Dunkley is very proud and excited to welcome these operations to the family. We look forward to working with all of the new folks to make our Company and everyone we work with successful.

Interested in a career with purpose in a location that offers an unparalleled quality of life?

Interested in finding out more about the products we make?

Interested in how we manage our forests for future generations?